5 must try food in Hanoi

The good and the great of Hanoi’s street food experience.

A large percentage of travelers will list ‘the food’ as a primary reason to visit a country like Vietnam. Luckily, Hanoi is the nation’s true mecca when it comes to this, meaning you’re in the right place if exceptional cuisine is anywhere near your list of priorities.

However, because we understand that it’s difficult to navigate food in a foreign country, we’ve compiled a list of five must-do dishes in the capital, along with where to try them out.

All of the food is native to Hanoi and each of the locations are authentic, locally-owned and frequented mostly by Vietnamese customers, which we know is always a good sign.

By the way, we haven’t forgotten the classic Pho, this dish gets it’s very own piece here.

Much like the humble Pho, and the Bia Hoi experience, you can’t come to Hanoi and not try the Bun Cha.

If you’ve walked around the Old Quarter in Hanoi before, you’ve likely smelt this dish already, such is its’ place in the fabric of Hanoi society. It’s a delicious, almost heady mix of tender grill pork and sweet, fatty pork belly in a light fish-sauce and papaya broth served with fresh herbs, greens and rice vermicelli. It’s simple, uncomplicated and delicious.

To top it off, most Bun Cha places will also offer nem ran as an accompaniment. This is essentially a deep-fried spring roll consisting of ground pork, mushroom and diced vegetables, and will push your taste buds into foodie heaven. Price-wise it shouldn’t push you much further than VND45,000 a bowl, with nem ran usually around VND15,000 depending on your location.

Bun Cha is everywhere in Hanoi, but if roaming the streets is not your thing, here’s three places we can recommend:

A very famous name in Bun Cha circles, with a five (yes, five) story location to boot. Well repped online, they are very used to foreigners showing up, and the food is priced accordingly (slightly more expensive) but still great value overall.

Yes, this is Obama’s Bun Cha place, and again, five story’s worth of bun cha make this another high turnover, highly popular location. Chances are, you’ll be lining up to get a table, but we don’t think you’ll be disappointed.

This one is considered a street-side favourite amongst locals, and while English is limited, just turn up point and you’ll be chewing through some of the best bun cha the city has to offer. Don’t be intimidated if it looks busy, there’s generally always room for one more.

This is a dish worthy of sharing, and in fact, is designed to be exactly that. Pho Cuon is a cute little pancake roll made of soft, wet rice noodle paper, garnished with cilantro, mustard leaf, lettuce and beef.

Perfect for a summers day snack, or as part of a larger feast, this is authentic, simple Vietnamese cuisine at its finest, and a perfect vacation from noodles and broth. A plate of five shouldn’t set you much further back than VND 25,000

Located on the ‘island’ of Truc Bach, the whole area feels like a small, quaint village, away from the hustle of the city, and a place where children still play football on the street.

If you need an English menu and bigger furniture to make you feel more comfortable, this is your place. It also has refrigerated beer and a wide array of menu options.

Another breakfast favorite, the secret to Banh Cuon’s success lies in the preparation of the almost translucent sheets of rice flour, brushed with a layer of liquid fat, and stuffed with minced pork, wood-ear mushrooms and onions.

Almost always accompanied by freshly fried shallots, lumps of pork sausage, sliced cucumber and bean sprouts, it still wouldn’t be complete without a splash of nuoc mam (you guessed it, fish sauce) for extra flavor.

Another light and easy-to-eat dish favoured by Hanoi’s grandmother’s, it’s readily available in alleyways and on the menu of eateries everywhere, we just dare you to stop at one plate.

Again, we encourage you to be curious and ask around; ‘Banh Cuon?’ should suffice, but if you need a location, here’s a couple to take away the anxiety:

Bun Rieu Cua is another classic northern Vietnamese rice vermicelli soup, one that although something of an acquired taste, has still become a favourite all over the country, and has a strong following around the world.

Served with freshwater crab and morning glory (a type of spinach) in a spiced tomato broth, it also comes with blood pudding, which some locals serving the dish may ask if you want removed to suit your foreign tastes.

Bun Rieu Cua is renowned for its nutritional value, with calcium from the crab paste (which also serves as the basis for the soup), iron from the blood pudding, and vitamins from vegetables like banana flower, bean sprouts and perilla.

This is actually the Hanoi version of a southern dish (Bun Thit Nuong) that somehow ‘migrated’ north, possibly via troops who returned to Hanoi after 1975, and has gained acclaim in its own right.

A delicious combination of salty, wok-tossed beef strips, rice noodles, bean sprouts and a helping of fried onions, the Bun Bo Nam Bo is balanced by a feathering of pickled carrots and vegetables.

Easy on the eye, it’s equally as pleasing on the stomach, with the secret being the seasoning of perfectly tender beef. Dressed with fish sauce and topped with roasted peanuts and fried shallots, the Bun Bo Nam Bo is a renowned pick me up in humid weather.

Open since the early 1980s, this place is one of the original, and many say the best shops selling the dish in Hanoi. 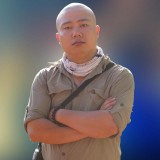